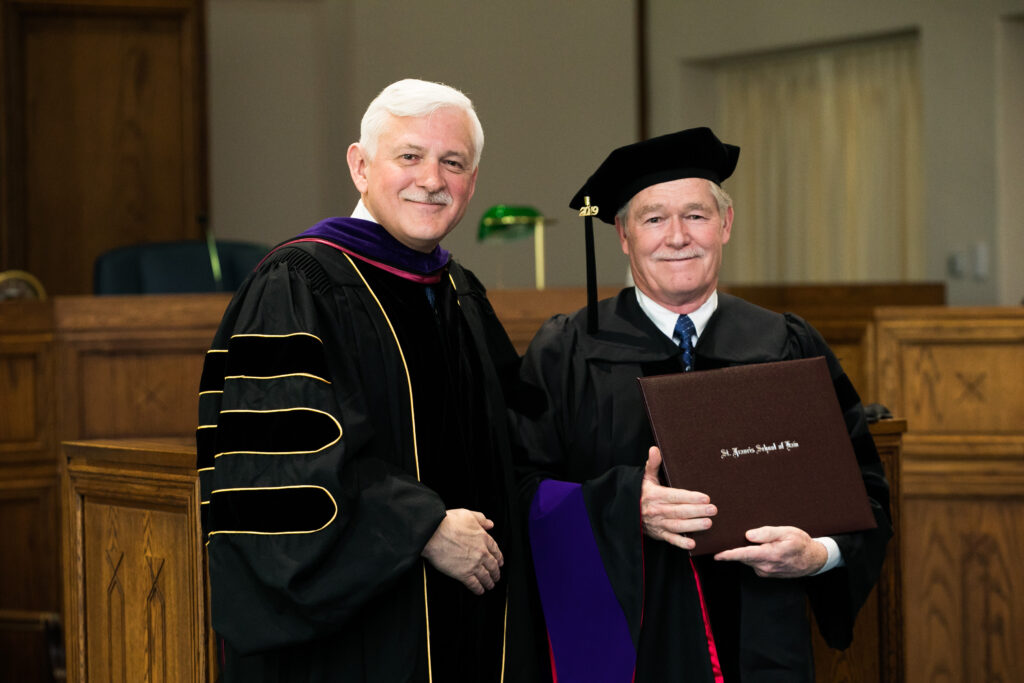 When engineering student Tim Crough completed his business law class, he walked away both fascinated and inspired. But for this rural Californian undergrad, 45 years would pass before he jumped back into the study of law. We got together with Tim to have a conversation about what inspired him to practice law at the age of 60, what he did to graduate with honors, and how his engineering expertise feeds into his legal work.

A Conversation with Tim Crough of St. Francis School of Law’s Class of 2019

What about law really grabbed your attention?

The business law class really struck me as a certain sensible way of either resolving disputes or coming up with solutions. It was the best introduction for me as to what the legal system was all about.

For my entire career, for 40 some years, I’ve always wanted to go to law school, but I was also engaged as a civil engineer, doing a lot of things that involved contracts, which is a big part of the law school curriculum. And it became evident through the learning process why we did certain things that I’d done for 40 years in my engineering career.

How did you choose a law school?

I interviewed with a number of online school programs. But St. Francis was the one that really attracted me. And the reason for that was my age — I was nearing retirement. The courses were six weeks long, so you are studying and working at the same time, probably 30 hours a week for school, and 50 hours a week for work. Once I retired, I’d have plenty of time to pursue my law career fully.

Has it been challenging, going back to school after so many years?

The really big shift for me was going to school online. I’d never really done anything like that, and I was a little anxious about it. I interviewed at a couple of online law schools, but I still wasn’t clear as to how that was going to work.

Having one class at a time, over six weeks, helped. But if I’d had to focus on two or three classes, along with my career, I don’t think I could have done it very well. The four-year program was actually a lot easier than my bachelor’s degree.

When did you graduate?

Where did you work after graduation?

I had just retired from engineering, and I was very selective as to where I was going to practice law. I wasn’t going to start as a clerk in the basement doing filing 60 hours a week; that’s not for me. I only submitted two job applications, and they were nearly identical.

I was hired on by Colantuono, Highsmith & Whatley, PC, up here in Grass Valley, California, within a month or two of passing the bar. They offered me a position right away because of my 40 years of experience with municipal water systems, which I quickly applied to this particular firm’s expertise, which is municipal law.

How did earning your JD online help prepare you?

[It helped me prepare] for having to work remotely. If I’d graduated 10 years ago, the technology wouldn’t have been applicable. I don’t think I could have gone into hybrid work like I am now. I probably would have just gotten my degree and moved on. The JD degree was really just a bucket list item, but now I’m interested in gaining some experience and sharing my knowledge. And to see where this takes me.

How did going back to school affect your family and social life?

We live on a lake up in Northern California and we have a close-knit social group on the lake. There were a lot of disappointed neighbors that I was not available to do things with. And so for five years — because studying for the bar was just as time-consuming as school — I wasn’t available to be as social as my wife was. But that was not a problem. Of course, we all had a big party when I finally finished up.

What St. Francis courses had the biggest impact?

What was your experience with St. Francis professors and staff?

The students really bonded in my bar review courses, and our professor was instrumental in helping me get through that. We were prepping for something called the Baby Bar: the first-year law school exam. After the first year, you’ve got to pass that exam before you can go on. I knew St. Francis had a very good pass rate for the Baby Bar. I can’t say enough about the people at St. Francis — instructors, the dean, regular professors, the staff, and so forth. It’s been very rewarding.

Were there any unexpected roadblocks?

Throughout my entire education, I never took a typing class. As an engineer in the ‘70s and ‘80s, I would dictate reports that were a quarter and a half-inch thick and then edit them with the red pencil, and so forth. There were secretaries that did the typing. So I struggled when it came to the bar exam: It’s essentially a typing contest for half of it.

What are some skills that you developed as St. Francis that you still use today?

One professor labeled me Mr. Perseverance, and it’s not so much a skill as it is an attitude. I didn’t have that attitude before getting into law school. At St. Francis, students are taught to teach each other, so we learn through communication. We comment on other people’s work, and learn from their work. And we did develop some great personal relationships over the computer screen.

What advice would you give to law students looking to enroll later in life?

It’ll take four years to go through this. And you’re going to be four years older. What do you want to be doing? Where do you want to be? When I started law school, I knew I was going to be 64 when I graduated. I had to ask myself, “Do I want to be engaged in doing something completely new, different from my entire life? Or do I just want to retire and sit on the sofa?” I said, “I’m going to law school.” It was also a way for me to stimulate my brain cells and have much clearer thoughts. I’m more physically fit than I was 20 years ago.

What’s your advice to students who are coming fresh out of undergrad?

Keep your eyes open. Absorb as much as you can, and learn from your fellow students. I’m very grateful that I chose St. Francis. It just seemed like this is the school for somebody that’s already got a career and wants to supplement that with legal knowledge. You can practice more than one discipline if you want to. It’s almost like the icing on the cake for me in my later years. It’s nice to say that I got a JD Degree.

Explore the St. Francis School of Law online JD program to see if it’s right for you. Learn more at https://stfrancislaw.com/